Jazz can be hard. Not the easiest music to get into. With all of the dense harmonies, intentionally complicated melodies and convoluted rhythms, it can require a great deal of concentration and mental lucidity to follow along and enjoy. I can personally vouch for that, having spent a very long time in love with the idea of Jazz rather than Jazz music in itself. The idea of sophisticated instrumentation and rich musical landscapes was a very appealing one to me.

To actually get into jazz, I needed mentoring, though, through albums that are decidedly easier to digest, sweeter and more aesthetically pleasing, making the journey of Jazz a much more fluid and enjoyable one.

This group is called Almwaya, and brings you 8 pieces that stitch together the Sahara, the Nile, the Lebanese Cedars, and the Swiss Alps in a delicate but exquisitely crafted tapestry of ouds, synths, and soundscapes courtesy of Maya Aghniadis of Flugen, and Wael Sami Elkholy. A Lebanese/Egyptian duo takes you on a musical trip in “Riding a Camel in the Middle of the Sea,” inspired by the Swiss Alps from a recording studio in Greece.

The first stop is Ducks and Drakes, an ambient introduction that sets the theme that follows on most of the stops of this album. A gorgeous soundscape that puts in mind a Victorian train setting off into a Saharan sandstorm, before it drastically shifts into the other trope on this record. Earthy melodies on the Oud from Wael Elkholy and warm voices humming and fluttering, desperately needing a chill nightly campfire in the desert.

Next up is Ethammili. Featuring Latin rhythms bordering on Bossa Nova. Male vocals carry the first half tenderly and sweetly into a haunting crescendo around the one minute fifty second mark. The second half sees the introduction of alien electronic effects, as the vocals evolve into a rhythmic chant-like delivery, with a backdrop composed of wild flutes flickering away and a sparkly piano. The voices pan left and right and explore their limits vividly, the result is quite hypnotic.

Je Veux Je Peux is up next. A thumping riff on the upright bass introduces the minor scale before the voice and the other instruments start veering off the beaten path, exploring very interesting musical scales that connect the east to the west. The bass line, which is starting to feel a little repetitive, is without doubt the glue that holds everything together. The riff on the bass changes in the last third, featuring an emotive microtonal slide that pulls the heartstrings, allowing the vocals and the oud to play even more tortured and strained passages. 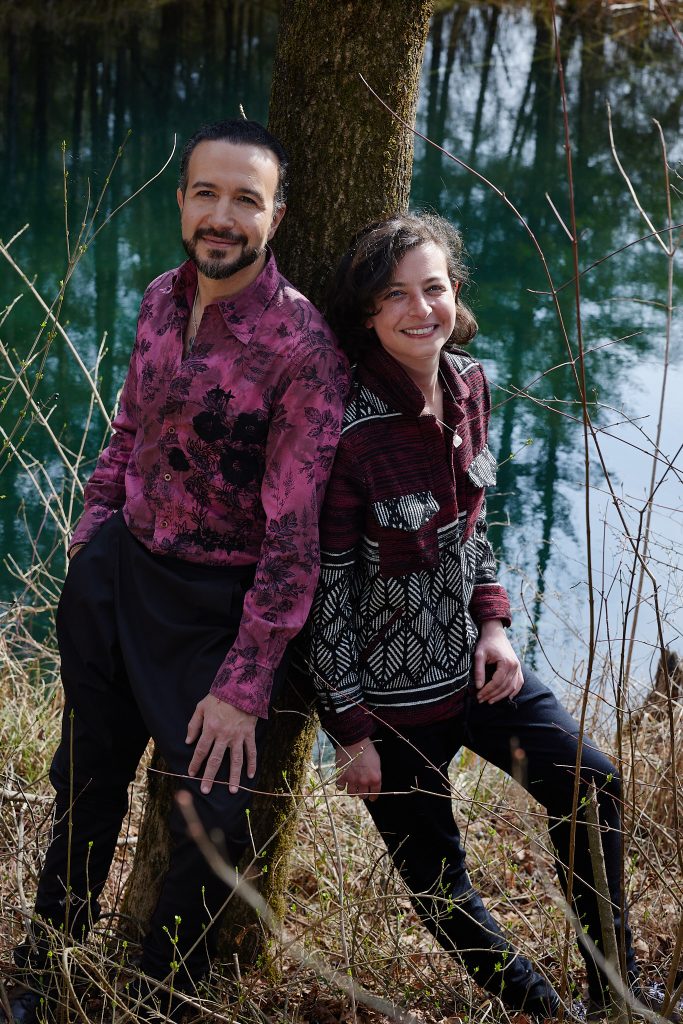 Tahunat Alma, Arabic for ‘The Watermill’ is a gorgeous number that features a distinct harmonic structure, rich layered voices, words about waves, mills, and riverbanks at night. Very noteworthy are the little droplet-like synth notes that play in the first third of the piece. The second third is very restrained, consisting mostly of just a couple of vocal lines and an oud strumming away. The last third starts with an intense vocal swell accompanied by the introduction of a composed beat and bassline. The restraint of all the elements in the last third allows it to grow to enormous proportions while maintaining its core and purpose. Quite hypnotic and is my personal favorite moment in the whole project.

Next up is Bea, the main single of the album. It is composed around a compressed and wooden upright bass riff, playing an intense melody that features a tritone, along with traditional drums, all playing in 5/4 time, adding up to create a trippy experience that continues to climb upwards until a sweet major breakdown cuts the song in half. The return is expertly executed, and the restraint exercised is again impressive and absolutely immersive.

Yenta gyae is again a trippy number in 5/4 time. The longest track on the record, it features a riff on the oud, layered mumbled vocal harmonies that explore the dualities of unbalance and balance, male and female timbres, the left and the right, the bass registers and the treble registers. An experiment of voices that features the first guitar heard throughout the album is ultimately one that leaves a lot to be desired. Feeling endlessly searching for a home, a breakdown or a crescendo that, in my opinion, never arrives.

Purple cloud takes us back to experiments that worked very well. The main motif playing on the oud reminded me of a piece of Egyptian folk, ‘Mahsoubko Endas’ by Eman Elbahr Darwish. Just me? Okay. The vocals start with an unusual melody, while the bass and the drums carry a strong and present rhythm section along with a distinctly composed chordal structure. An arhythmic medley prepares us for a vast second half of ethereal vocal swells of sweet otherworldly melodies and a complex interplay of a wide array of vocal timbres. It all swells endlessly before disappearing suddenly, leaving us feeling betrayed and thirsty for more.

The last stop is Moonlight Bay. While not featuring any new ideas or tropes for most of its runtime, it stands, to me, as the most picturesque and cinematic piece of the project. A section in the middle that dabbles with dissonance and modal mixture might be the section most packed with musical data on the whole album, difficult to comprehend, but easy to listen to. Four minutes in, something really magical starts. As all the dissonance subsides, the titular Moonlight Bay finally comes into view for a radiant and restrained final minute of mysterious and spaced-out passages from the voice, fluttering percussion hits, and starlight notes on the synths. Perfectly ending an almost perfect musical journey.

I don’t think I find it hard to describe this piece of work. While it’s undoubtedly Jazz, it’s also undoubtedly light and pleasing to the senses. While not overpowering or confusing, it is undoubtedly intelligent and filled to the brim with exquisite choices, performances, and passionate deliveries. It’s a collection of works that explores different lands, different times, different sounds and brings together elements that never belonged together, with endless ease and breathtaking craftsmanship. I love it.