Rena Hart is not an up-and-coming artist or someone who is still experimenting with their music. With over 10K followers on Instagram and thousands of views on her YouTube videos and music, Rena has set a strong foundation for herself and knows where she’s headed. 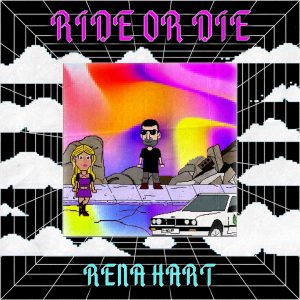 ‘Ride or Die’ is her first song released after a two-year break. It is written and performed by her and produced by Excel Beats whom she got acquainted with through her rapper cousin, Cash Janezmart, and recorded at Icebox Studios in LA. Excel beats produced most of Rena’s songs and helped make her vision come to life, musically. The song has electronic sound effects with a fun vibe and catchy beat. The artist’s vocal interpretation is unique with a distinguishing style and a seductive, sexy vibe. She has a very varied taste in music and doesn’t stick to a specific genre while she is mainly influenced by Roisin Murphy, The Weeknd, Zhu, Bjork, Portishead, and Sade, not specifically for their music, but also for artistic visions and performances. The song is about a very personal time in Rena’s life when she found herself at crossroads; she was leading a successful and stable life, yet still felt unfulfilled in the corporate life which led her to reevaluate her choices and decided to deviate from her path and follow her passion. Amidst that, she had a supportive partner who helped her through this transitional phase, which is what the song became mainly about.

Rena has it all; she is a remarkable singer, songwriter, and a smart businesswoman. She co-founded The LA creative; a film and photo space that offers set design and creative direction for projects, leading her to curate various music events and artist showcases which makes sense given her background and previous work experience in corporate life.