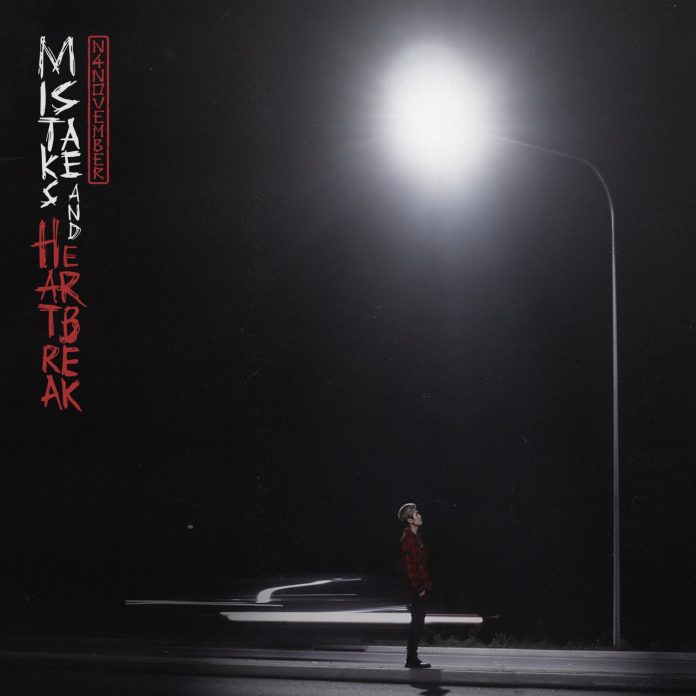 Musicians don’t necessarily go through more hardships or turmoil in life than anyone else, but what sets them apart is how they lay their souls bare for us to see – giving us a glimpse of those intricate human emotions we all struggle to understand and explain. In his latest single “Mistakes and Heartbreak”, Alex, the sole member of his one-man band “N4November”, pens a sorrowful open letter to a lover that he lost. Something very unique about this song is the tone and demeanor Alex is using as he directly speaks to his (ex) lover, reciting what went wrong and how crushingly regretful he feels about it.

The song begins with lo-fi synthesizers over layered vocals that make you feel like you’re going through a mid-winter teenage heartbreak sometime in the 2000s. Electronic drums and minimalist clean guitars accompany the chorus and it’s not really until the second verse that we can hear more vibrant guitar passages, which creates a feeling of accumulation. Accumulation of feelings and unsaid words – I can see now why the song was named Mistakes and Heartbreak.

Alex’s lyrics and the way he mournfully chants them hit me hard, like how he starts the second verse by saying:

“It was one more night

I didn’t want to fight with you

For the thousandth time

Now you’ll never be mine…” which was so honest and heartfelt. By the time we reach the second half of the bridge, Alex sings his highest notes in the passage

“I wish I knew what I know now

I wish I could go back somehow”

and it impressed me because most of the song, except for this part, has lower notes and is sung in a typical baritone range.

I can’t think of the last time I heard someone as sincerely heartbroken as this. Something feels extra honest about such a masculine voice sounding vulnerable and questioning whether or not he was enough, and he ends the last lyric by confirming “I’m not enough”. Alex’s consistent and strong chest voice with its grounded low parts and supported high belts sent shivers down my spine more than once. My only setback with this song will probably be my fear of repeating it too much and feeling that sense of despair it puts me through time and again. Considering this was the first song Alex wrote when he was 16 years old, it made me wish more artists would go back to basics and channel emotions they can describe in detail just like this.