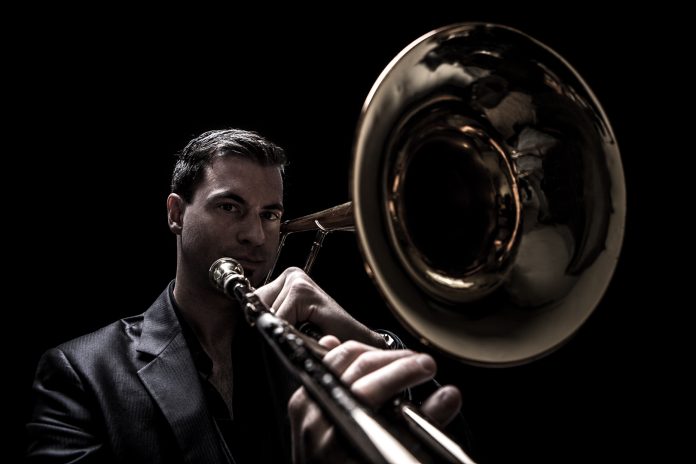 Nick LaRiviere and The Best Laid Plans have just released their latest single “Where We Go”; It is the title track from their upcoming new album “Get Ready!”.

“Where We Go” has contemporary elements with shades of jazz. It is a fun, refreshing, and positive song that features beautiful, repetitive piano notes. A drum drive is added to the mix shortly after, and the song builds on a one-minute kick. A swing and some adorably warm trombone notes from Nick LaRiviere himself.

Nick’s singing featured the song with some real quality moments and made for a distinct character, the ups and downs sounded great and the changes and additions of instruments throughout make for fun listening. He makes it an emotional song with cinematic features.

Strong and attractive, “Where We Go” contains all the elements needed for a summer anthem. The band features Nick La Riviere on trombone and vocals, Miguel Valdes on trumpet, Barrie Sorensen on sax, Kelly Fawcett on guitar, and Attila Fias on keys and vocals, Louis Rudner on bass, and Alex Campbell on drums.

After all, we are in front of a sophisticated, but at the same time simple, well-made, and objective musical work. It is a song that grows within and awakens joy in the listener as if a beautiful day is about to begin and every obstacle that life imposes upon us is overcome. Not surprisingly, Nick was inspired by the spirit of West John Mann’s real-life battle against Alzheimer’s disease and showed a certain insight.

Nick LaRiviere says, “I wrote this song around the time that Spirit of the West frontman John Mann was struggling with Alzheimer’s,” says Nick La Riviere. “While I didn’t know personally him, I perform regularly with another Spirit member, Geoffrey Kelly, and heard about his struggles. The song is a personal take, stating that I want to achieve as much as I can with the time I have on this earth, and hopefully do something worth remembering, like he did, even if I can’t remember myself.”

“Where We Go” is a sweet song that will satisfy your senses with its unique melody, making you want to hear more from Nick LaRiviere and The Best Laid Plans.