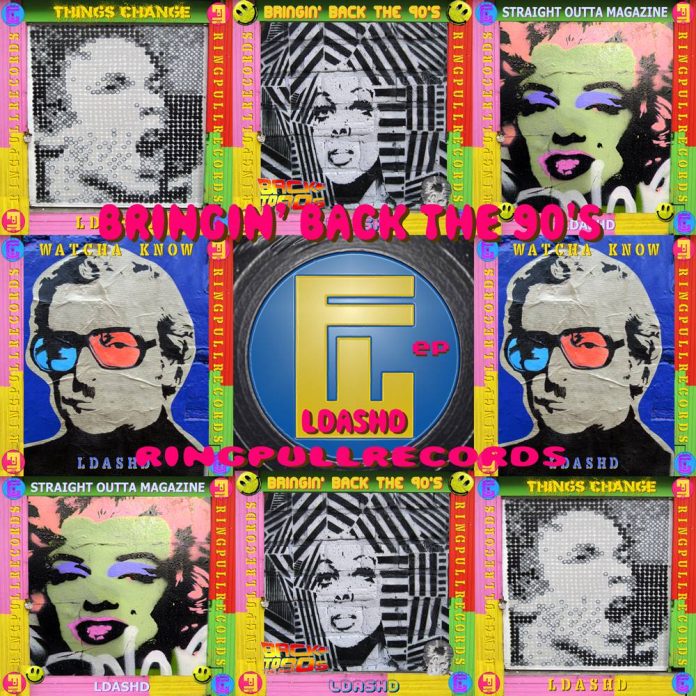 Naming an album can be as tricky of a task as you want it to be. It can be simply named after a word or a phrase that the artist feels suitable, it can be something that offers an insight into the music, it can be the title of a significant song on the release, or it can be a statement that describes the general musical direction(s)… and many many other possibilities. Here it happens to be all the above.

Coming from London, LdashD is an experimental/electronic music producer and DJ who’s been active since the 90s. This release of his, titled ‘Bringing Back the 90s’, aims to do exactly that, musically and atmospherically. 4 songs long, it’s not a demanding listen, in fact, it’s groovy and quick-paced and well-produced enough to make it easy and packed with fun.

Starting back-to-back with ‘Watcha Know’ & ‘Straight Outta Magazine’, basically the same song with different arrangements. ‘Watcha know’ is thick and jungle-y in vibes. Packed with distorted guitar riffs and heavily compressed drums and 90s disco vocals and samples. A little too long, heavy-handed and with underwhelming vocals, it might be the most challenging song here to enjoy. The same, though, can’t be said about ‘Straight Outta Magazine’. Less than half the length of the preceding song, the vocals are still heavily processed and synthetic and are sub-par on one or two occasions but are largely allowed to shine more freely. With an infectious groove and jangly, satisfying guitars, it’s a very enjoyable song.

‘Things Change’ is a perfect marriage between the recent teens and the nineties. Fast, energetic, full of manic samples, youthful calls… and Indian folk chanting. It’s a song that will get the blood rushing to your veins and really get you hyped up. Saving the title track for the last spot. ‘Bringin’ back the 90s’ is very similar in harmony to ‘Things Change’, the same manic energy, but more space for vocals and chants and a more twisty and trebly drumline that’s very groovy and enjoyable.